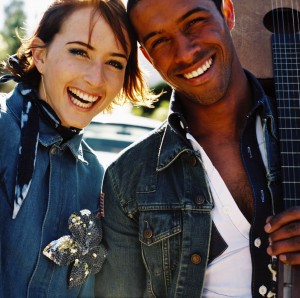 If I had to sum up my entire marketing and social media strategy in one sentence it would be "Be a person."

Sadly, I can't take credit for thinking of that particular phraseology. In June 2010 actor Jeremy Redleaf spoke on social media at the Next Up Young Workers Summit in Washington DC, and he said "people like to talk to people... so act like a person."

At the time I heard this, I had been working off a protracted party analogy for explaining my social media strategy, which is still good when you have time to explain it, but which isn't very portable. All at once, everything I'd been trying to convey about the nature of this new market was laid out in four little words: Act. Like. A. Person.

Which then became "Be a person" because why pretend?

When I'm being a person online, my focus is on relationships, on community and on stability. In real life, no man is an island. We all have family, friends, and neighbors who's opinions matter. As individuals, we tend to think about how our actions will effect the people we care about. The deeper a person goes into an larger structure, the less and less that individual responsibility seems to matter. But as organizations strive to find people where they are via social media and online marketing, we're learning that people don't respond to impersonal advertising, or random calls to action for faceless entities they feel they don't or can't know.

For example, I took my car to get it's oil changed this morning, and as usual I brought along my laptop so I could get some work done. Only the Honda service center had put up some really silly and weird wifi restrictions so I couldn't get any research done, or even get on Facebook.

Honda service center also blocks the Huffington Post. As far as I can tell it's because it's from Ireland. Which is untrue.

A couple of minutes later, a sponsored tweet from Honda came up on my feed asking me to RT a hashtag. In reality, it's the twitter ad algorithm's fault and not Honda's. Twitter chooses who gets sponsored tweets, and it is still really difficult to determine tone in social media, but it was Honda's name on the tweet.

Now, I love my Honda. This is the best car I've ever owned. Honda would have to do a lot to me to counter-act the kind of brand loyalty I have for their awesome cars, and their awesome staff. But getting advertising from them when I'm tweeting about how frustrated I am that my 4 hour oil change wait will not be a productive one due to their weird wifi nanny is not helping my morning be better.

Which is another thing about being a person online. The staff at the Honda service center were really compassionate about my troubles and politely told me about a Starbucks that was around the corner less than a block away. They also told me that this is a common problem with their customers, and that I could contribute to getting the wifi nanny dismantled by telling the management how annoying it is, which I plan to do. They saw I was frustrated, but also that I wanted solutions and they helped me out to the best of their ability. I didn't get what I wanted, but I left that interaction completely satisfied with the outcome.

If the service center staff interaction had been like my online interaction is would have gone more like this:

Me: Hi, the wifi won't let me go on any of the blogs I need to do research for an article I'm writing. Is there a way to turn it off, or bypass it? Honda staff: Would you like a new car? We have several pretty ones for you to look at!

(Actually, it was this kind of behavior a the Ford service center that turned me off Fords forever. But that's a story for another time.)

Honda dealerships and service centers are privately owned, so Honda proper doesn't have control of things like wifi. Small organizations like me can't include negative keywords in our twitter ad targeting, but a big company should be able to tell twitter not to push a sponsored tweet if a person is tweeting both "Honda" and "Service center." It'll restrict the number of people who might get a sponsored tweet from Honda, but it'll probably make a big impact on how appropriate that tweet might be. Which is part of being a person online. You don't just go for the most people possible, you go for the most appropriate people possible.